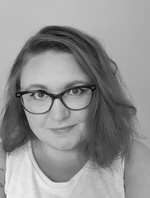 Edyta is originally from Warsaw, Poland, where she gained her first Master’s degree in Psychology in 2014. During that time, she worked as a psychologist in a several mental health clinics where she supported clients with varied mental health problems, particularly anxiety and low mood. Edyta also volunteered for a national LGBT charity in Warsaw, where she worked as part of their psychological team. She developed knowledge and understanding of positive sexuality, which she now considers the basis of her work. She is also a vivid supporter of affirmative therapy.

Edyta currently works as a Psychological Wellbeing Practitioner for the Self Help Services in Manchester, where she supports clients with common mental health concerns, such as depression, anxiety, stress, among others. She is also involved with the Talking Therapies service within the LGBT Foundation, where she works therapeutically with the Foundation’s clients – both individuals and couples.

Edyta is currently undertaking the professional training in Psychosexual Therapy at University of Central Lancashire and is subjected to ongoing supervision.

Edyta is a General Member of College of Sexual and Relationship Therapists (COSRT) and works in accordance with their Code of Ethics. She is fully insured and has up to date DBS checks.

Edyta has a particular interest in working with issues regarding supporting couples in reinventing their intimacy and enhancing communication within a relationship. She is also interested in working with clients who struggle with their sexual function and wish to enhance their sexual wellbeing, both as individuals and couples.

All practitioners at Sex Therapy & Relationship Therapy in Manchester are members of one or more of the following professional organisations:
Consulting Rooms
Tel  07711 199282
Email Us